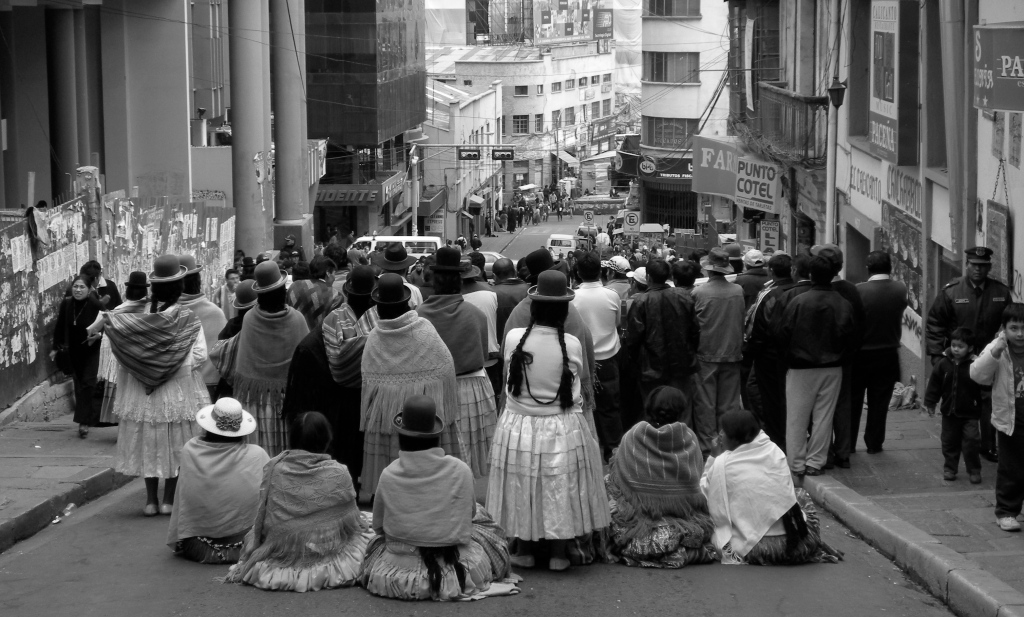 An on-the-ground account of how Bolivians revolutionized their country by taking over the streets.

Processing…
Success! You're on the list.
Whoops! There was an error and we couldn't process your subscription. Please reload the page and try again.

An Ethnography of Revolution

The Sovereign Street: Making Revolution in Urban Bolivia analyzes the takeover and use of urban space by grassroots social movements that led to revolutionary changes in early twenty-first century Bolivia.

In the early twenty-first century Bolivian social movements made streets, plazas, and highways into the decisively important spaces for acting politically, rivaling and at times exceeding voting booths and halls of government. The Sovereign Street documents this important period, showing how indigenous-led mass movements reconfigured the politics and racial order of Bolivia from 1999 to 2011.

Drawing on interviews with protest participants, on-the-ground observation, and documentary research, activist and scholar Carwil Bjork-James provides an up-close history of the indigenous-led protests that changed Bolivia. At the heart of the study is a new approach to the interaction between protest actions and the parts of the urban landscape they claim. These “space-claiming protests” both communicate a message and exercise practical control over the city. Bjork-James interrogates both protest tactics—as experiences and as tools—and meaning-laden spaces, where meaning is part of the racial and political geography of the city.

Taking the streets of Cochabamba, Sucre, and La Paz as its vantage point, The Sovereign Streetoffers a rare look at political revolution as it happens. It documents a critical period in Latin American history, when protests made headlines worldwide, where a generation of pro-globalization policies were called into question, and where the indigenous majority stepped into government power for the first time in five centuries.

Pre-Order from UArizona Press (Code AZFLR for 30% off)

“This is a richly rendered primer of social protest and mass mobilization in Bolivia that will make the reader want to organize a general strike or go block a highway. Bjork-James details with great insight and intimacy the tactics and effects of Bolivian mass mobilization, arguably some of the most effective examples of street action and political change in the world today. A must-read for scholars of social movements and activists of the street.”

Bret Gustafson, author of New Languages of the State

“Written in beautiful and engaging prose, The Sovereign Street takes the reader to the frontlines of protest events in contemporary Bolivia and provides a glimpse into the rituals and routines of the urban occupations that changed the course of the country’s history. Based on extensive field research, the study offers a nuanced account of how dimensions of race, class and place shape protest activities and outcomes.”

Roberta Rice, author of The New Politics of Protest

Carwil Bjork-James conducts immersive and historical research on disruptive protest, grassroots autonomy, state violence, and indigenous collective rights in Bolivia. He is an ethnographer, photographer, writer, and participant in creative mass movements. He works as Assistant Professor of Anthropology at Vanderbilt University, with a courtesy appointment at Vanderbilt Law School.